France consists of a diversified economy that is highly developed and mixed. It is the 6th largest in the world by GDP and 10th largest by PPP. France is a member of the EU and its economy is the 3rd largest in the union. The economy is complemented by well-established manufacturing and energy industries as well as the agriculture and service sectors.
The country is the 5th largest exporter and 4th largest importer country worldwide. Hence, the nation is among the top active participants in international trade. It mainly exports machinery, chemicals, perfumes and cosmetics, pharmaceuticals, vehicles and more, while importing goods such as machinery, vehicles, plastics, iron, steel, organic chemicals, and electrical machinery among others. However, the country has a negative balance of trade and with the information below, you can take advantage of sea and air freights for your international trade interests with the country.
Being a member of the European Union, France maintains free trade agreements and carries out trade regulations under the union. Trade partners of the EU with which it holds FTAs include Vietnam, Australia, New Zealand, Mexico, Singapore, Japan, and Canada among others. As a member of the harmonized trade system in the EU, the importing and exporting trade regulations of France are covered by the EU.

France oversees an extensive sea freight forwarding in most ports of the country, of which the biggest ones are described below: 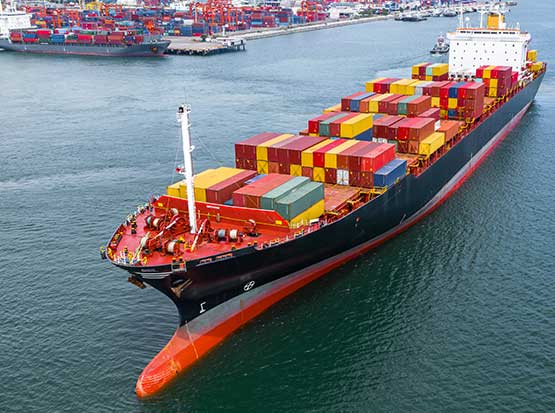 Located in Marseille, Fos-sur-Mer in France, this port was established as early as the 6th century BC. Its East and West docks occupy almost 10,500 hectares. It handles a container throughput exceeding 1.1 million TEUs with a cargo tonnage of more than 86 million tons annually.
The port has well-established road and rail links to nearby regions within the country.

This port was established in 1524 and spreads over an area of 10,000 hectares. It is situated in Le Havre in France and handles over 2.2 million TEUs with a cargo tonnage exceeding 74.3 million tons per year. It mainly deals with liquid cargo such as crude and refined oil, coal, cereals, animal feeds, cement, containers and more through three terminals.
The port has good rail and road links to nearby regions in the country.

Located on the Rhone River, this port is also known as Port Édouard-Herriot. It was built in 1935 and inaugurated in 1938, and occupies 210 hectares. Its facilities handle a container throughput exceeding 220,000 TEUs with a cargo tonnage of over 12 million tons annually. The port mainly deals with container and bulk cargo.
It is well-connected by road and rail to other regions within the country.

Below describes an overview of air freight forwarding in major airports of France.

This airport is located in Seine-et-Marne, Île-de-France in France and spreads over an area of 3,257 hectares. It started its operation in 1974. It has 6 cargo terminals and handles a cargo tonnage exceeding 1.9 million tons.
It has well-established rail and road links to other nearby areas in France.

It is located in Villeneuve-le-Roi in Orly and south of Paris in France. It spreads over an area of 15.3 square kilometers and was established in 1932. It handles an annual cargo volume exceeding 98,900 tons.
It is well-connected to nearby areas by good rail and road links.

Your Shipping Partners In France

Join Us and Partner with Reliable Agents in France

This website uses cookies to improve your experience while you navigate through the website. Out of these, the cookies that are categorized as necessary are stored on your browser as they are essential for the working of basic functionalities of the website. We also use third-party cookies that help us analyze and understand how you use this website. These cookies will be stored in your browser only with your consent. You also have the option to opt-out of these cookies. But opting out of some of these cookies may affect your browsing experience.
Necessary Always Enabled
Necessary cookies are absolutely essential for the website to function properly. This category only includes cookies that ensures basic functionalities and security features of the website. These cookies do not store any personal information.
Non-necessary
Any cookies that may not be particularly necessary for the website to function and is used specifically to collect user personal data via analytics, ads, other embedded contents are termed as non-necessary cookies. It is mandatory to procure user consent prior to running these cookies on your website.
SAVE & ACCEPT